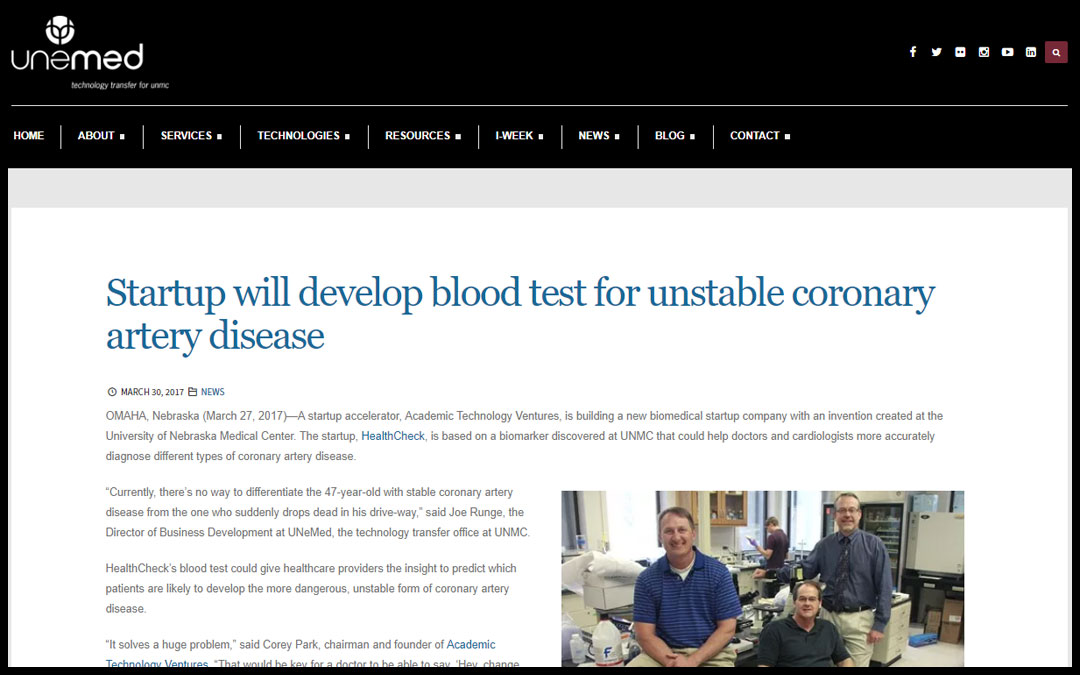 OMAHA, Nebraska (March 27, 2017)—A startup accelerator, Academic Technology Ventures, is building a new biomedical startup company with an invention created at the University of Nebraska Medical Center. The startup, HealthCheck, is based on a biomarker discovered at UNMC that could help doctors and cardiologists more accurately diagnose different types of coronary artery disease.

An interdisciplinary team of researchers at the University of Nebraska Medical Center in Omaha—Michael Duryee (left), Geoff Thiele (center) and Dan Anderson (right)—believe they found a way to determine who will develop potentially deadly heart disease with a simple blood test. (UNeMed file photo)

“Currently, there’s no way to differentiate the 47-year-old with stable coronary artery disease from the one who suddenly drops dead in his drive-way,” said Joe Runge, the Director of Business Development at UNeMed, the technology transfer office at UNMC.

HealthCheck’s blood test could give healthcare providers the insight to predict which patients are likely to develop the more dangerous, unstable form of coronary artery disease.

“It solves a huge problem,” said Corey Park, chairman and founder of Academic Technology Ventures. “That would be key for a doctor to be able to say, ‘Hey, change your lifestyle now.’”

Coronary artery disease is the accumulation of plaques inside the arteries. Recent research has shown that virtually everyone, regardless of age, has some form of the disease. Some people have a stable, non-life-threatening form of the disease. Others have the more dangerous, unstable version.

In the unstable, and usually lethal, form of the disease, large deposits of plaque can break open, creating one of two life-threatening problems.

A piece of dislodged plaque might be swept away in the blood stream. The debris could then wedge itself further downstream, acting as a dam that cuts off blood flow to the heart. Or, back at the rupture site, clotting factor and blood platelets rush to the injury. In the process they create a similar bottleneck that reduces or cuts off blood flow.

The result of either scenario is a sudden heart attack or a stroke.

Telling the difference between stable and unstable coronary artery disease has been a stubborn riddle of medicine until a trio of UNMC scientists developed the new blood test. The inventors are Geoff Thiele, Ph.D., a professor of internal medicine; Michael Duryee, a research coordinator in the College of Medicine; and Dan Anderson, M.D., Ph.D., a professor and practicing cardiologist at UNMC and Nebraska Medicine.

They found that patients with unstable coronary artery disease also had in their blood large amounts of certain molecule known as MAA, which is short for malondialdehyde–acetaldehyde.

A blood test that looks specifically for the MAA molecule would give healthcare providers a better picture of a patient’s health. Rather than using a simple blood pressure reading or cholesterol count, a high MAA count could help a physician prescribe a more effective course.

“I’ve lost family members to heart disease,” said Jason Pottinger, the director of business strategy at Academic Technology Ventures. “I have family members right now with heart disease. I think they would have benefitted greatly from some real, hard evidence that would be like a slap in the face. A slap in the face to say, ‘Listen, this is science, and this is where you’re heading. Don’t be a statistic.’”

HealthCheck will initially set up in New Jersey, where the company is expected to raise additional capital to support further testing. The additional tests will be used to secure FDA clearance, and hopefully enter the market within the next two or three years, Park said.

“Best-case scenario is this becomes a standardized test with yearly screenings,” Park said. “I think it’s got enough legitimacy to become—not necessarily mandated—but part of that regular regimen.”