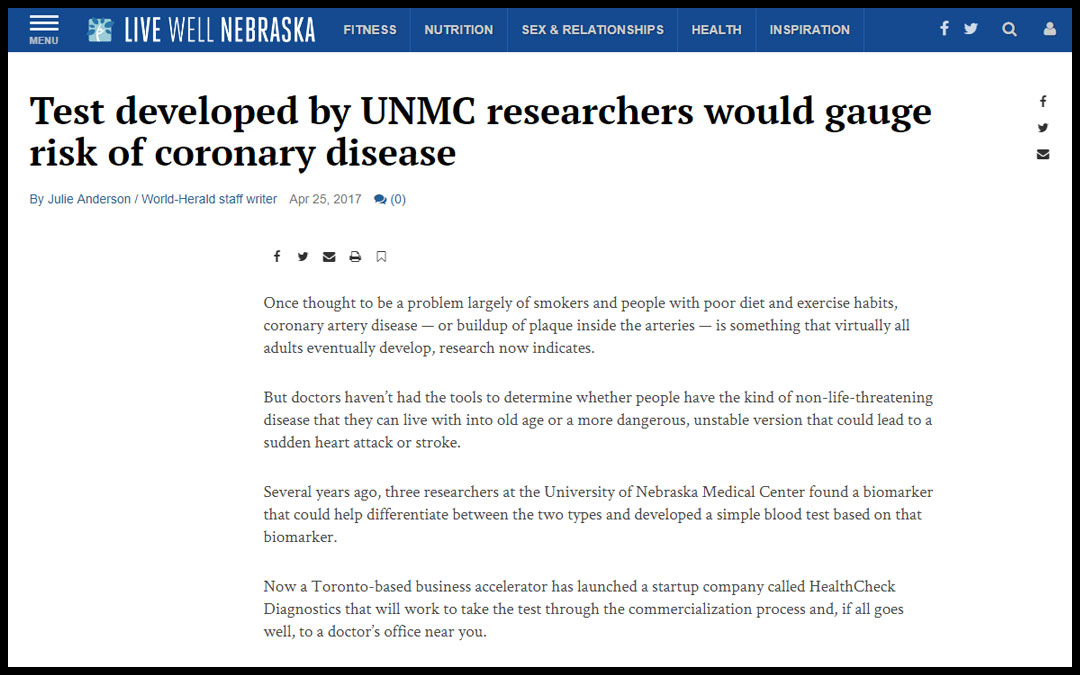 Once thought to be a problem largely of smokers and people with poor diet and exercise habits, coronary artery disease — or buildup of plaque inside the arteries — is something that virtually all adults eventually develop, research now indicates.

But doctors haven’t had the tools to determine whether people have the kind of non-life-threatening disease that they can live with into old age or a more dangerous, unstable version that could lead to a sudden heart attack or stroke.

Several years ago, three researchers at the University of Nebraska Medical Center found a biomarker that could help differentiate between the two types and developed a simple blood test based on that biomarker.

Now a Toronto-based business accelerator has launched a startup company called HealthCheck Diagnostics that will work to take the test through the commercialization process and, if all goes well, to a doctor’s office near you.

Dr. Daniel R. Anderson, an associate professor of medicine in the cardiovascular division of UNMC’s College of Medicine, said several existing tests look for elevated levels of inflammation, an immune response that doctors now know is part of the equation in coronary artery disease, not to mention many others.

But until now, he said, nothing has been available that could gauge the risk that 30- or 40-year-olds might face years down the road or help doctors determine which of them require more aggressive prevention and treatment, he said.

That’s a concern given that several studies indicate that 70 percent of adults have atheroscerotic disease by the time they’re in their third or fourth decade. In the emergency room, such a test also could help indicate whether patients who arrive with chest pain have pain of another type — say, pleurisy — or are in imminent danger of a heart attack.

“This is the first time we thought ‘Hey, this is something that might actually predict a cardiovascular event,’ ” Anderson said.

Fellow researchers Geoff Thiele, a professor of internal medicine, and Michael Duryee, a research coordinator for the medical college’s rheumatology and immunology division, initially identified the biomarker, a naturally occurring molecule that’s a strong indicator of inflammation, while studying inflammatory conditions such as arthritis and alcoholic liver disease. The molecule, malondialdehyde-acetaldehyde, or MAA for short, also appeared to be connected with coronary artery disease.

The researchers contacted Anderson, a cardiologist and researcher, and the three began looking more closely at cardiovascular disease, specifically the hardening and narrowing of arteries known as atherosclerosis.

The researchers first found MAA in plaque. In the more dangerous, unstable form of cardiovascular disease, large deposits of plaque can break open. Pieces can either be swept away, catch downstream and cut off blood flow to the heart, or clotting factors and platelets can rush to the injury and create a blockage. In either case, the result is a sudden heart attack or stroke.

Then the researchers tested blood samples from several hundred people who had donated their blood for research in two separate pilot studies. They found that people with coronary artery disease had large amounts of MAA in their blood. The study appeared in the journal PLOS One in 2014.

Michael Dixon, president and CEO of UNeMed, said the accelerator, Academic Technology Ventures, will raise additional capital and take the test through the next steps of development. HealthCheck initially will set up in New Jersey, which is home to other groups involved in developing diagnostics.

Anderson said those next steps include additional testing to validate the test and then taking it to the U.S. Food and Drug Administration to demonstrate that it will do what the researchers claim.

Said Dixon: “It’s still early. They need to raise the money and build it into a successful diagnostic. But it’s a big step for us to get outside investors … to develop this into a product.”